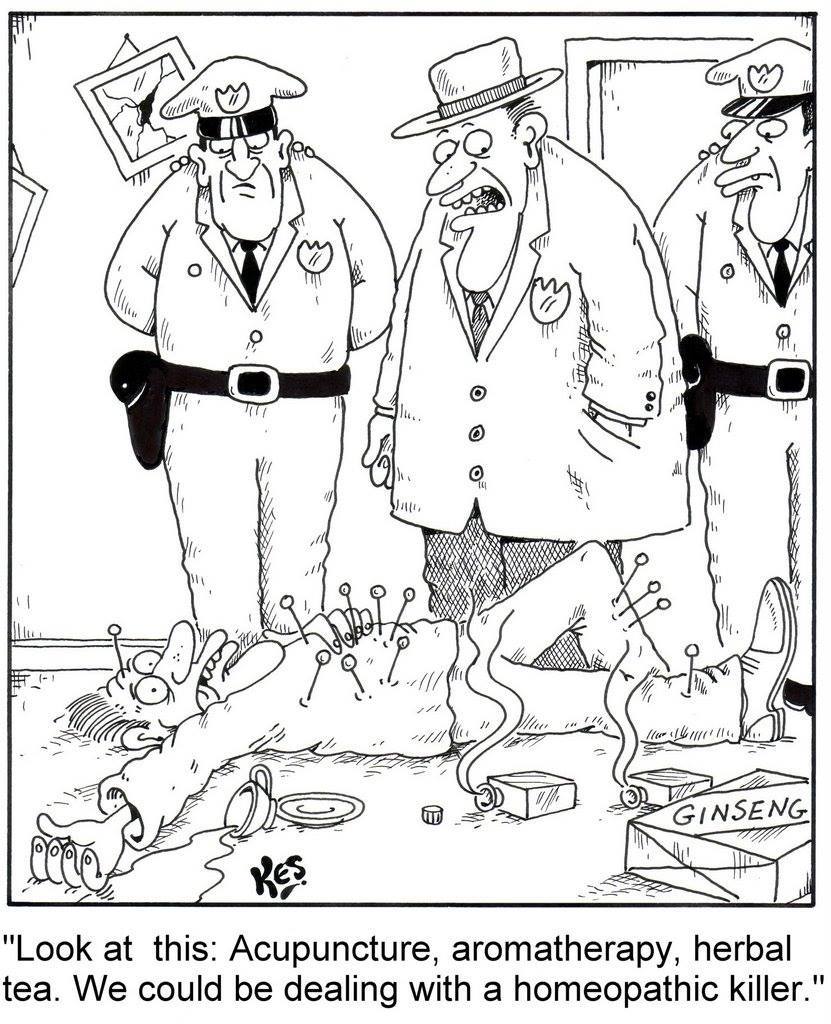 Here’s another “science battles” trend that bothers me. Â There’s a lot of frustration on the internet with this or that being bad science, and for the most part I’m on the side of science. Â People do some really uninformed and blatantly incorrect things.

But a lot of people actually have reasonable positions and simply articulate them poorly. Â The worst cases of these are when people jump on vocabulary bandwagons where they join sides based on a misunderstanding, and then get (improperly) eviscerated for it. Acupuncture, Aromatherapy and Herbal tea are all fine examples of things that are not homeopathy in the literal sense.

Homeopathy is one of my favorites. Â Homeopathy, in its original and literal meaning, is full of science crap. Â It officially refers to the dilution of something in water so much that there are negligible parts-per-billion of the original substance left, then using that water as a cure. Â Doesn’t work; no reasonable scientist believes it does outside of a placeboÂ effect.

So people saying they like “homeopathic” remedies routinely get the brunt of internet bullying splayed against them, and, from one perspective, rightfully so.

The problem is that many of these people are simply using the term improperly. Â A lot of them mean that they’d rather use chicken soup than cold syrup, or acupuncture for relaxation rather than pills. Â They aren’t making a medical mistake (well, not necessarily)… they’re making a vocabulary mistake. Â Check out the cartoon above for a fine example.

Recently, I think the whole GMO foods debate is falling into something similar. Â I see a ton of people posting that anti-GMO is ridiculous, and that the anti-GMO people are anti-science idiots. Some argue that we’ve been doing GMO for thousands of years by unnaturally selecting sweeter corn and redder tomatoes, and that Monsanto and others are doing the same thing just more efficiently in a lab rather than over generations on a farm.

And these people are right. Â Strictly speakingÂ the simplest form of what GMO producers are doing is just accelerating and nudging what is otherwise a natural process. Â GMO stands for “Genetically Modified Organism”, but genes are evolving all the time. Â What is there to get upset about?

Except that SOME of the anti-GMO folks are simply using the term incorrectly, or as a proxy for other things, and their arguments shouldn’t be discounted just because of a poor use of language. Â I, personally, have problems with GMO crops because of the patent/copyright issues, and the lack of accountability for GMO producers around letting their crops cross pollinate with other breeds. Â This has nothing to do with how the food arises, and it’s not a scientific argument about the food production itself at all, nor about health concerns. Â It’s a legal issue that still put one of my toes in the “anti-GMO” camp even though I’m not against, like, bananas.

People concerned about health issues can fall into this trap as well… most crops people want to be labeled “GMO” are hybrids designed to be resilient to pesticides, which, the argument goes, MORE pesticides are being sprayed on these crops because they can take it. Â So the GMO debate deconstructs into one about pesticides; the GMO component is at best a contributing factor, and the genetic portion of the science is not what the opposition is arguing.

This is important to me because it’s an example of the types of things that drive wedges into otherwise useful public dialogue. In any good debate it’s important to define your terms early, so you can debate the issues, not the vernacular. And it’s a problem on both sides of the argument; anyone assuming that a word or phrase does or does not mean a specific thing. This is often more acute in social fields where words like “conservative”, “liberal”, or even “feminist” can have people who agree on the underlying goals strongly disagree on how the word is interpreted.

If you might be in this situation, educate, and listen, don’t lambaste; a small percentageÂ of trolls control too high a portion of the conversation, and that’s just not good for anyone. The next time a friend says they’re trying a homeopathic remedy for something, ask to confirm what they mean before explaining how stupid they are. If they mean they’re going to go have a hot toddy instead of magical diluted asparagus water, then behave accordingly.

← The Truck is Running! Yay!
When the “Quantified Self” meets Medical Reality →